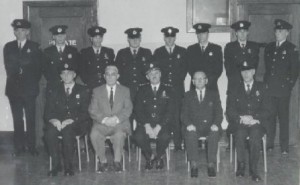 In the late 1800’s the CPR and Soo Line Railways met in what was to be later named Weyburn. The name Weyburn is believed to be a modification of the Scottish term “wee burn” or small creek. Like many communities at the turn of the century, where the railroad met, communities developed, Weyburn was no different becoming an important railroad community in the Southeast part of Saskatchewan. Weyburn became a town in 1903 and a City in 1913.

It is assumed policing for the town of Weyburn between the years 1903 to 1913, was done by the Royal Northwest Mounted Police, which later became the RCMP. From researching RCMP history it was found that a Constable Henry Lett received a commendation and was promoted to Corporal in 1903 for arresting an American ‘gunslinger’ by the name of Idaho Kid who had come to Weyburn, got drunk and began to shoot up the town.

The Weyburn Police Department was formed in 1913 under the leadership of Chief Constable Blaikie and three Constables, Shee, Lyons, and Partridge. From a very old, hard covered book of court dispositions we have found accurate records of some of the early work of the Weyburn Police Force. From dealing with disorderly conduct, Intoxicated in public, vagrancy, to wounding with a knife the Weyburn Police Force, under the guidance of Chief Blaikie, started the long history of keeping the City of Weyburn safe. Chief Blaikie remained with the Police Service as Chief for twenty years, until 1933, when Chief Constable Grieve took over. Chief Grieve held the post of Chief Constable for a period of three years. In 1936 the leadership again changed with Chief Constable Hill taking over, and remaining in charge until 1944. At that time, for unknown reasons, the City made the transition to the Royal Canadian Mounted Police. Some believe with many young men overseas during World War II it was difficult to get officers for the Weyburn Police Force thus requiring the RCMP to take over the responsibility of the policing for this community. 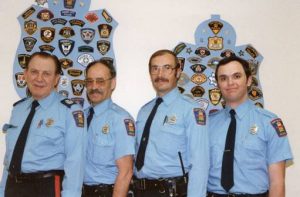 County Constabulary in England and three years experience with the British East African Force of Kenya. Constable Clarence Vennard had two years experience with Whitewood and Midale Police Forces and had served with an Artillery Regiment during the war. Constable Edward Williams had served four years with Birkshire County Constabulary and with the British Army during WW II. The remaining compliment of the Weyburn Police Force was made up of Constable William Goodwin, Constable Gordon Dynna, and Constable William Vatamaniuck all who had no policing experience.

These new police officers received their training with the Regina and Saskatoon Police Force’s. When they started their duty of upholding the law, their uniforms had not yet arrived so for a short period of time had to make their presence felt without the visible accruements of a Police Officer. Policing at that time was mainly foot patrols, with the Service having only one Motorcycle and one Police Vehicle. The officers were not armed at that time and had to rely on their communication skills and ‘brawn’ to take offenders safely into custody. Within one year, 1958, it was recognized that the strength of the department needed to be increased, and the Weyburn Police Force was expanded by two more officers. Chief McCardle was known in the community as a Police Officer’s Police Officer who maintained an air of authority at all times. Though he would show his sense of humor and ‘human side’ when alone in his office with trusted friends, his belief in firm Police presence set the tone of the early Weyburn Police Force. He retired after 17 years as Chief Constable in 1974.

Chief Edward (Ted) Williams, one of the original members of the Force, was appointed the next Chief Constable. Under Chief Williams’ leadership the Force grew in strength to twelve Constables, four Sergeants, one Inspector and a Special Constable. The Department also expanded the support roles with one full time secretary and one Parking Enforcement member. The Department which up until Chief Williams’s tenure had been unarmed immediately began training and carrying personal firearms. At a Provincial level policing was also changing, with the passing of the Police Act and setting policing standards within the province. It was also during the late 1970’s that the Saskatchewan Police College formed to ensure consistent training for all municipal police officers serving in Saskatchewan. 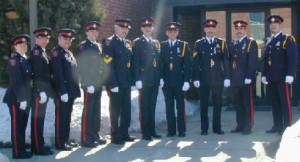 In 1985, Chief Williams left the Weyburn Police Department due to health reasons, and one of the last original members of the Department was sworn in as the Chief Constable. Chief Gordon Dynna took the helm of the Weyburn Police Department in 1985. He led the changes required by the adoption of the Charter of Rights and Freedoms, and through some tough budget years which resulted in fluctuating staff levels. In 1993, Chief Dynna retired after 36 years of service to the community.

In 1993, William S. Millar became the fourth Chief of Police of the Weyburn Police Service. Chief Millar had risen through the ranks after starting with the Weyburn Police Service in 1966. It was during this transition in 1993 that the Weyburn Police Department hired its first female officer. Constable Caroline Chartrand. Over the next few years with the necessity for ongoing and enhanced training and overcoming the impacts of the budgetary lean years, Chief Millar worked hard to get the Police Department back to full strength. Mandatory training for officers was introduced, and the police department saw an increase in the cost of investigations. During this time, public education and crime prevention were a forefront of this Police Department. Chief Millar retired in 2003 going onto be the Executive Director of the Saskatchewan Association of Chiefs of Police. 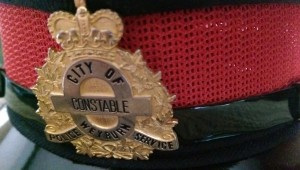 Chief Pritchard was instrumental in developing new and improved patrol units. Almost immediately in 2012, the Bike Patrol was reinstated after a hiatus – improving face-face interaction with the public and police members. 2012 saw the commencement of major turn-over of police members due to retirements; ultimately, welcoming new members nevertheless also saying good-bye to senior officers and their experience.

2013 began with the expansion of HUB programming in the SE; Weyburn Police Service becoming an integral partner with the Southeast Regional HUB. 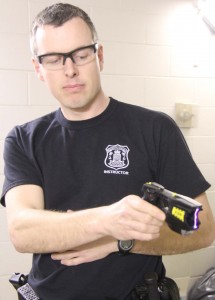 n Police shoulder flashes as well as vehicle decaling.  2016 also saw the development of the Integrated Drug Unit with Estevan Police Service after the RCMP chose to reassign a member from the Integrated Criminal Investigation Unit from Weyburn Police Service. Following the approval by the Saskatchewan Police Commission, Weyburn Police Service began roll-out of Carbine’s, a Semi-Automatic Rifle, improving officer safety and the ability for police to protect the public where officer’s would be required to make use of a high-powered weapon in high risk situations. Vehicle fleet improvements also occurred with the introduction of AWD vehicles helping police attend calls for service safely in all weather conditions. In 2016, the police service held a fleet of Ford Interceptor Utility’s, a Ford Interceptor Utility Pick-up, a Chevrolet Tahoe PPV, and a Dodge Charger Pursuit. 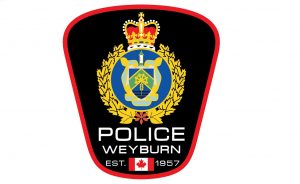 une 2 & 3, 2017  Weyburn Police Service celebrated 60 years of serving the community. An open house was held with several activities including station tours, a video presentation, cake cutting and barbeque,  a Child Seat Clinic, Forensic Fun Zone and many other activities. Weyburn Police Service also unveiled a new shoulder flash which paid tribute to past designs while continuing into the future with a modern look.  A new updated badge decal was also added to the decaling package of the patrol vehicles.  The Weyburn Police Association also hosted it’s first Golf Tournament with proceeds going towards the Weyburn Humane Society.

In November, a structure change occurred.  Rod Stafford became the first Deputy Chief of the Weyburn Police Service. The change occurred  from the rank of Inspector to Deputy Chief, to better reflect the role that office has played for years prior.  All frontline officers were issued Narcan Naloxone spray to help protect the public & emergency responders from potentially lethal opioid overdoses.

2018 began with another major IT upgrade. All computers were upgraded to a single integrated secure operating system. A made-in-Weyburn anti-impaired driving campaign, developed and administered by Cst. Melinda Mintenko, received provincial & national attention thanks to it’s community-partner approach in providing safe transportation options for those consuming alcohol at local liquor establishments.   A Combined Traffic Services of Saskatchewan (CTSS) decal was designed by Cst. Kalin Wiebe. The design was approved late in the year by the Saskatchewan Police Commission for use provincial wide.

Weyburn Police Service saw its first major increase in authorized strength in 2019; the first time in over a decade.  An additional position was created for the Criminal Investigation Unit. A Community Safety Officer (CSO) position was also created. Lisa Robertson accepted this position as Weyburn’s first CSO. The Drager Drugtest 5000 was introduced as an Approved Drug Screening Equipment (ADSE) to assist police in detecting drug impaired drivers.   Cst. M. Mintenko received the National Traffic Award in August at the national conference for the Canadian Association of Police Chiefs in Calgary in recognition of her “This Ride’s on Us” program.  Cst. J. Bartsch, Cst. J. Sonnenberg, and Cst. K. Wiebe received the inaugural Van de Vorst Award and a silver Challenge Coin to recognize their work in taking impaired drivers off the road.  In September of 2019, after 7 years of service at Weyburn Police Service, Chief Marlo Pritchard stepped down to take on a new role as president of the newly formed Saskatchewan Public Safety Agency. Deputy Chief Rodney Stafford assumed the role as Acting Chief.

In May of 2020, Chief Jamie Blunden joined the Weyburn Police Service as the eighth Chief of Police. He retired as an Inspector with the Winnipeg Police Service after a 29 year career.